With the Grain of the Universe

With the Grain of the Universe 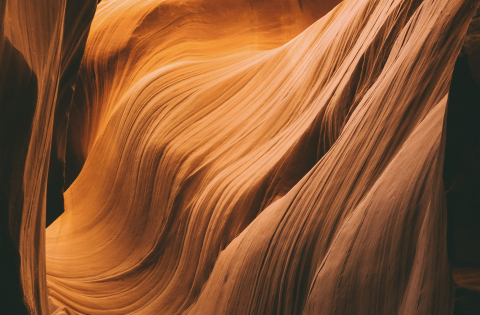 The loud sobbing was coming from somewhere in the blackness of the sanctuary. In the darkness, I found a dear friend laying across the seats crying uncontrollably, pleading with the Lord for mercy.

For many years now, I have led the congregations I have pastored in a Tenebrae service on Good Friday. Tenebrae is a Latin word that means “shadows.” The service is usually set around a table of candles (most often either seven or 40). Any reflective surfaces, and even the cross itself, are draped in black cloth. Usually, the liturgy for the service begins by telling the story of creation and continues through the various high moments of God’s activity in the biblical story of redemption. As the story of salvation is recounted, the candles are lit one by one. Of course, the story reaches its climax when the “Word became flesh and dwelt among us” (John 1:14) and the final light—the Christ light—is lit.

At that point, however, the service shifts to focus on the ultimate rejection and crucifixion of Jesus. As that part of the story is recounted, often using the seven last words Jesus spoke, the candles are extinguished one by one. In the final act of the worship service, a globe is placed over the Christ-candle, eliminating its oxygen, and eventually leading to the smothering out of the world’s true light.

The congregation is invited to stay in the darkness for as long as they want or need. However, they are asked to leave in silence and shadows so that they might return on Sunday in the joy of the new creation life of the risen King.

Despite its simplicity, I have always found Tenebrae to be a moving and meaningful practice and service. It is not unusual to hear sniffling and faint tears being wiped away at its conclusion. I did not, however, expect the echoes of wailing that led me, many Good Fridays ago now, to get up and try to discover their source.

When my friend sensed my presence in the darkness, he sat up, invited me to sit beside him, and then he leaned on my shoulder and continued to cry. After several minutes, he was ready to talk. He began to share how the lit candles in the service had served as a reminder of all the ways God had demonstrated grace, love, and mercy to him across the years. However, as the candles were extinguished, the many sins in his own life— most of which he was working diligently to keep hidden in the shadows—came bursting in and were overwhelming him with grief. When the flame of the Christ light went out, he knew in that moment that the Spirit of God was bringing him to a moment of crisis and decision. Was he going to allow the sin and brokenness to extinguish all the good and beautiful things God was trying to accomplish in his life? Or was he going to lay all his brokenness aside and put on the new life offered to him in Christ? His tears, he explained, were the consequence of honestly confessing and taking off the weightiness of sin and, in contrast, experiencing the overwhelming relief of putting on the life of the new creation.

What my friend was experiencing that night was the reality of God’s justifying grace. And he encountered that grace through authentic worship.

God will not stop until our relationship is set right with Him, and as a consequence, our relationships with one another (including our enemies) are restored, our right relationship as caretakers (and not dominators) of creation is renewed, and even our proper sense of valuing who we are as people made uniquely in God’s image is made whole. So an important aspect of worship is to recognize the tenacious justifying grace of God continually at work in the world and in our lives.

One way this justifying grace was realized in more traditional forms of worship was through the reading of the law or Torah. More often than not, the Old Testament reading serves as a reminder of the unique and holy life God intends for His people. The Torah is a reminder that we are not autonomous individuals who get to make up the rules for our lives. In fact, when we go our own way, we do more damage to our relationship with God and to God’s design. As James K. A. Smith writes, “The announcement of the law reminds us that we inhabit not ‘nature,’ but creation, fashioned by a Creator, and that there is a certain grain of the universe – grooves and tracks and norms that are part of the fabric of the world. And all of creation flourishes best when our communities and relationships run with the grain of those grooves.”1

Again, in traditional liturgies, the reading of the law is usually followed by congregational prayers of confession of sin, followed by prayers of assurance and forgiveness. It is as though the reading of the law, as in the time of Ezra, brings God’s people to a tearful awareness of how far we have gone astray and how much we have lived against the grain of God’s universe. But it also serves as an invitation to receive the gift of divine reconciliation and forgiveness. This practice assures us again and again of God’s unwillingness to let sin win.

Not just in the hearing of the law but also in the preaching and proclamation of the gospel, worship reminds us of God’s ultimate work of reconciliation in and through the person of Jesus. So often in the practice of preaching, the members of the congregation are invited to look at Jesus, look at ourselves, and then confess the great difference. In Christ, that huge difference is not a reason for despair but a reason to rejoice and to receive the justifying grace of God that makes all things new.

Two days after praying with my friend in the darkness of Good Friday, we greeted one another with a hug in the light and glory of Easter morning. The tears of sorrow and the shadows of sin were receding in the light and love of and the hope of the new creation.

May our worship, week after week, remind the faithful of the divine love that will not let us go.